Teachers united against DU administration, issues of 4 these… 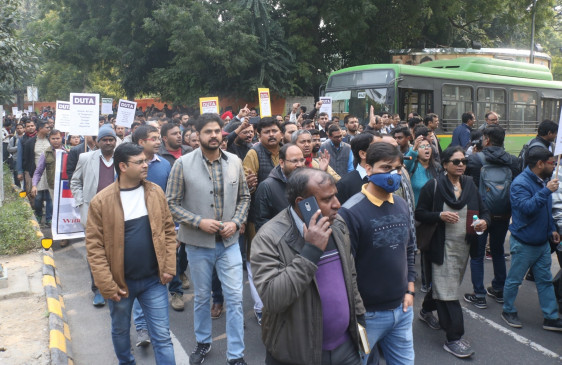 These new provisions have been made by Delhi University for the recruitment process of Assistant Professors. The teachers have protested against this provision, saying that it will make 4000 ad hoc teachers working in Delhi University and temporary teachers unemployed. DTF Secretary Professor Abha Dev Habib has appealed to the teachers to come in large numbers to protest outside the VC office. The DTF has appealed to the teachers to join the strike and demonstration in large numbers on Friday to send a strong message to the newly appointed Vice Chancellor that DU teachers want absorption and nothing less.

Professor Abha Dev Habib said that it is shocking that the Executive Council, in its first meeting, has brought up an agenda item which is against the record of the 5 December discussion. Which allowed all the serving ad-hoc teachers to appear for the interview. Now giving 100% weightage to the selection committee, displacement of ad-hoc teachers is a real threat. What about the thousands of ad-hoc teachers who have given their best years in the service of the University under dire circumstances? He said that we should tell the VC that we will not tolerate violation of record of discussion of 5th December. Agenda 5.1 should be withdrawn and we will implement one time UGC regulation for absorption of temporary and ad hoc teachers.

The same Delhi Teachers Association has submitted a memorandum to the Vice Chancellor of Delhi University. In this memorandum, it has been demanded from the Vice Chancellor Professor Yogesh Singh that the regularization, adjustment, confirmation of adhoc teachers in various colleges affiliated to Delhi University should be done soon, who are waiting to be permanent since years.