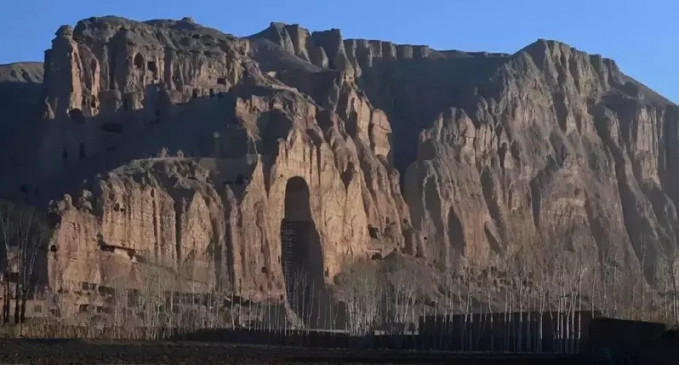 Digital Disc, New Delhi. The Taliban destroyed the giant statues of the Bamiyan Buddha years ago. Now Taliban fighters are using the relics of the Bamiyan Buddha for target practice. Recently, several video clips have surfaced on social media where Taliban fighters were seen hurling large grenades into caves where giant Buddha statues stood for more than 1,400 years.

A video clip shared by Gandhar News shows at least seven Taliban gunmen firing near the caves. They were also seen raising slogans of Taliban. In the video clip, a grenade can be seen detonating near the wall of the site where a giant Buddha statue once stood. When Gandhar News asked Ahmadullah Wasik, deputy head of the Taliban-led government’s cultural commission, about this, he said the investigation was on and the perpetrators would be caught and brought to justice.

According to the news site, the perpetrators are from the Taliban’s command unit, which is stationed there to protect the historic site. Mulla Shirin Akhund, the provincial governor in Bamiyan, promised to protect the site. Last month, the Taliban promised they would act as custodians of Buddhist relics and would also attract tourists to Bamiyan.

Mawlawi Saif-ul-Rahman Mohammadi, the head of Bamiyan’s Directorate of Information and Culture, told the media that the Taliban government is committed to preserving these priceless and historical monuments of the province, according to Indianarative. Local and foreign tourists can visit the historical sites and Buddhas of Bamiyan. But most historians, archaeologists and anthropologists who have closely watched the destruction of Bamiyan sites and the actions of Taliban leaders do not trust the Taliban and all their promises to protect Afghanistan’s heritage to portray their liberal image. Huh.

When asked why the Taliban destroyed the Bamiyan Buddha statues in 2001, Mohammadi justified the previous decision by saying that they had destroyed historical Buddha statues in 2001 on the basis of religious ideology. He said that the Islamic Emirate did not take any hasty decision at that time (2001). It was reviewed and researched on the basis of Islamic laws and then they destroyed them.

The 2001 destruction in Bamiyan can be called the biggest attack ever against the historical and cultural heritage of Afghanistan. The irony is that Mullah Hassan Akhund, who executed the orders of Taliban founder Mullah Omar, is now the prime minister of the new Taliban government. The same man is now promising to protect all of Afghanistan’s ancient heritage. After the capture of Kabul on August 15, the terror group asked its fighters to strongly protect the remnants, monitor them, stop illegal excavations, and protect all historical sites. No one should try to create trouble on such sites or think of using them for profit, their statement said.

The statements made by the Taliban in this regard are correct, but it will be the actions of the Taliban that will matter. So far, the Taliban is not following through on promises made in Doha which mainly include protection of human rights, women’s rights, education and inclusive government.