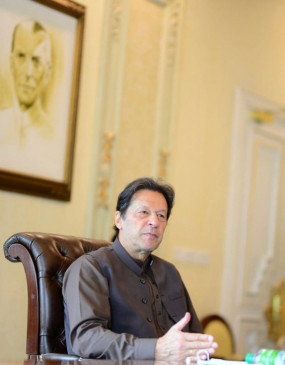 Digital Desk, New Delhi. Pakistani Prime Minister Imran Khan seems to be in double trouble. On the one hand Tehreek-e-Taliban Pakistan (TTP) has trapped him and on the other hand the Afghan Taliban is targeting him.

Khan’s troubles have only increased due to a general perception emerging at the ground level in Pakistan, where people are angry and hurt by the announcement of a ceasefire agreement between the Imran Khan government and the UN banned organization TTP.

This information has been given in a recent report of The News.

According to the report, Hina Jilani, chair of the Human Rights Commission of Pakistan, said the extremist group TTP must be held responsible for the killing of thousands of people before any talks can take place to bring them into the national political mainstream.

Opposition parties are also angry, as they were kept dark about Imran Khan’s secret deal with the TTP.

Pakistan Peoples Party chief Bilawal Bhutto Zardari said, the problem is that the government has not taken Parliament into confidence and held talks unilaterally with the TTP, which is not right. He insisted that the only way to negotiate with the TTP is from a strong position.

“We need real red lines, especially with regard to the Constitution,” he said.

Although both sides are silent on the terms and conditions of the secret deal, Pakistani media have reported that the Imran Khan government has placed three conditions before the TTP – accept the constitution, lay down arms and obtain an identity card. In response, the terrorist group has also put forward its own terms – sharia system and courts in the tribal belt and Malakand, removal of Pakistani military barricades from the Durand Line, the TTP should be allowed to keep arms in tribal areas and the Pakistani army should be allowed to carry tribal weapons. Must be removed from belt.

Pakistani experts believe that both the TTP and the government are engaged in a tactical game. While Imran Khan’s strategy is to divide the group, the statements emanating from the TTP do not suggest that he is talking from a weak position.

Amidst the talks, Imran Khan was reprimanded by the Pakistani Supreme Court, which summoned Khan and questioned him for over two hours on secret deals with TTP terrorists, the main accused group in the 2014 murder of 140 school children .

A judge asked Khan that instead of taking action against him, why are we bringing him (TTP) to the negotiating table?

The court has asked the prime minister to heed the demands of the parents and take action against the school attackers and submit the report in four weeks.

According to Pakistani analysts, the deal has been brokered by Sirajuddin Haqqani, the interior minister of the Taliban regime and the terrorist organization’s head – it is as if one terrorist group is mediating talks between another terrorist group and the government.

Some Pakistani observers feel that Imran Khan is making deals with terrorist organizations first with TLP and then with TTP for his survival, as his government is losing grip on the country. The deteriorating economic situation is haunting Imran Khan, who is already embroiled in several controversies including the appointment of the ISI chief.

Even the supporters of Imran Khan’s change slogan Naya Pakistan have started talking about his mistakes and prejudices.

(This article is taken in an arrangement with indianarative.com)