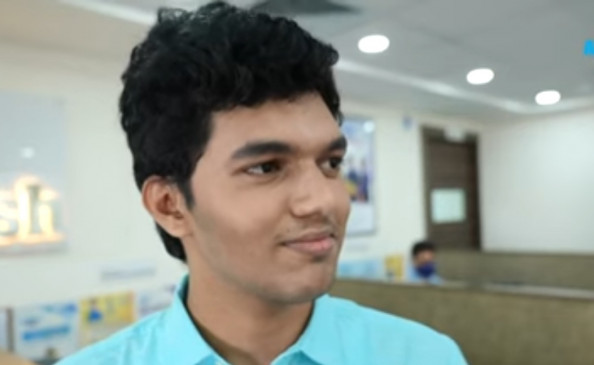 Digital Desk, New Delhi. National Testing Agency (NTA) has declared the result of NEET 2021 exam. Mrinal Kutteri from Hyderabad, Tanmay Gupta from Delhi and Karthika from Mumbai have topped the NEET exam. All the three students have secured 720 marks out of 720 in this exam. After the results came, Mrinal said that in his initial days of school he wanted to become an engineer. Then after this he started playing video games with friends and while playing video games, he intended to join the Indian Army. Mrinal told that he wanted to become a doctor in the army, but gradually his focus shifted to becoming a doctor. He told that in the end his aim remained only and only to become a doctor.

Mrinal tells that he did not have any fixed time table for studies. He did not study even in very long sessions. Sometimes after studying for 45 minutes and sometimes for an hour, he used to take a break. While advising the students preparing for NEET and other examinations, Mrinal said that there is no specific recipe to crack the exam. “One thing I have realized is that you should pay attention to which method is working according to you,” he said. Keep exploring new ways of reading and learning. At the same time, Tanmay Gupta of Delhi said, after passing class X, it becomes clear in the mind of the children that what type of course they want to take medical or non-medical. Similarly, it was clear in my mind that I want to go to medical.

Tanmay says that this is a long study of 2 years. Board exams and NEET exams have to be taken forward simultaneously. Once the two were in sync, the process became easier. Tanmay says that reading more in a day will not do anything, but keep reading little by little continuously. It is a 2 year long journey. If you get tired in the beginning after taking more pressure, then there may be difficulties in studying for 2 years long. Karthika G Nair, who topped the exam, had Biology as her favorite subject and Physics as her least favorite subject, as she does not find it very interesting to study with a numbered subject. Regarding the lockdown implemented after Corona and especially after Corona, Karthika says that then she was in class 11th and was about to reach 12th.

Karthika said, we suddenly had to shift to mobile and laptop. For coaching also had to take online coaching. Initially it was very difficult, but during the coaching, the teachers also supported and worked equally hard with us. This made things easier later on. With the declaration of the results, now the admissions in medical colleges will be started soon. On October 28, the Supreme Court had allowed the NTA to release the NEET result 2021. After getting permission from the Supreme Court, the result of NTA has been declared on November 1. Students who qualify the NEET exam will be able to get admission in various courses including MBBS, BAMS, BSMS, BUMS and BHMS in various reputed medical colleges of the country.

After the amendment in the National Medical Commission Act, 2019, the entrance examinations for MBBS course of 13 AIIMS located across the country and Jawaharlal PG Institute of Medical Education and Research, Puducherry have also been taken through NEET. The NEET UG 2021 exam was conducted on Sunday, September 12, between 2 PM and 5 PM, in over 3,800 exam centers across 202 cities in India. Around 16 lakh students all over the country had applied to appear for the exam. According to the NTA, the medical entrance exam NEET-UG was also conducted for the first time in Dubai on the initiative of the Government of India. Apart from the examination center located in Dubai, the NEET-UG exam was also conducted in Kuwait. This time the central government has decided to implement 27 percent OBC reservation in NEET examinations. Also, the students were given the facility to take this exam in 13 languages.