Iran considers India’s role very important in dealing with I… 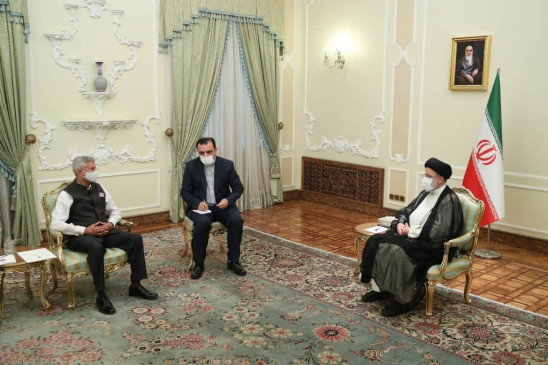 digital desk,New Delhi. Iranian President Ibrahim Raisi’s mantra of working closely with regional countries without interference from foreign powers is being carried forward by two of his chief lieutenants.

In New Delhi for regional security talks on Afghanistan on Wednesday, Shamkhani called for regional coordination and cooperation among Afghanistan’s neighbors, as the growth of Daesh (ISIS) and Takfiri jihadists pose a real threat to peace in the region.

Takfiri is a fundamentalist Muslim group that excommunicates other Muslims for their customs and accuses them of apostasy.

The second threat highlighted by the Iranian rear admiral, who is also the country’s former defense minister, is a resurgence of sectarian violence in Afghanistan, which will ultimately have far-reaching effects, not just in the immediate neighbourhood, but across the region.

Calling for the formation of a nationally inclusive government in Kabul that would include all ethnic and religious groups in the country, Shamkhani put forth three major concerns of the Reiki government.

“Our first concern is the involvement of some countries in the transfer of the Takfiri element from elsewhere to Afghanistan,” he said. This was going on in the past and intelligence gathered by intelligence agencies indicates that it is still going on and this is just adding to our concerns.

The Navy veteran stressed that to counter terrorism emanating from terrorist groups, their financial channels need to be identified and cut immediately.

Shamkhani, in a meeting of security chiefs of seven other countries of the region, including India, expressed Iran’s second major concern about the increasing poverty and humanitarian crisis in Afghanistan.

This, he said, would provide an excuse for terrorist groups to recruit fighters and that in itself would further destabilize the country. Taking this point further, he said that in such a scenario, the Afghan people and especially the neighboring countries will have to pay a great price.

Shamkhani expressed her third serious concern on the crisis of Afghan refugees and migration from Afghanistan. Iran has been hosting more than three million Afghan refugees for many years, of whom only six percent are living in camps.

It is important to mention that unfortunately 96 per cent of the relevant costs and expenses of these refugees are funded by our own country and only four per cent are paid by relevant international organisations, he said, seeking immediate assistance from the agencies concerned. has gone.

Looking at Iran’s new foreign policy, Iran, under the leadership of Ibrahim Raisi, has referred to the country’s Foreign Minister Hossein Amir-Abdullahian as a balanced, dynamic and intelligent foreign policy, in which friendship and brotherhood hand over all the countries of the region, especially extends to its neighbours.

The new priority was highlighted during a joint ministerial meeting of foreign ministers of neighboring countries of Afghanistan and Russia held in Tehran last month.

Expressing his opinion in the Portuguese newspaper Diario de Noticias on 5 November, Amir-Abdullahian wrote, “In this new agenda, relations with neighboring countries and Asian countries are a priority, as well as based on historical, cultural, religious and geographical ties. Improving political and economic relations in the region, which will serve as the basis for a new mobility and connectivity.

The minister further wrote that this new approach reflects the deep belief that our commonalities in the region are far more important than our short-term differences and conflicts.

He said the new round of joint efforts on Afghanistan would serve as an important test given the vast and diverse potential of Afghanistan’s neighbors in this regard.

(This article is taken in an arrangement with indianarative.com)