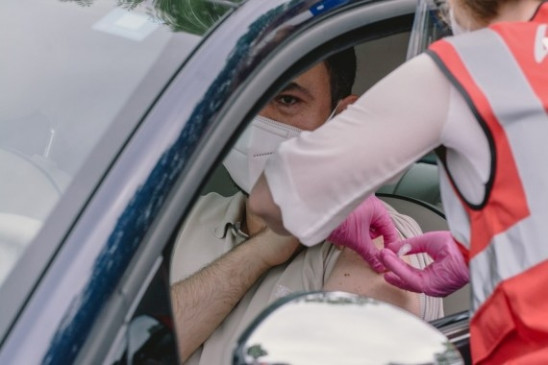 Digital Desk, Berlin. The coronavirus infection rate in Germany has reached its highest level, so some of the country’s 16 federal states have started banning unvaccinated people at events, restaurants and bars. The country’s most populous North-Rhine Westphalia is included in the list of states implementing the so-called 2G rule, Xinhua news agency reported. 2G stands for GIMPFT (Vaccinated) and GetEstate (Tested).

Germany participates in events during the carnival season, which is also known as the fifth season and begins on 11 November. In this, people should additionally follow the new rule, according to which vaccination or individuals will also have to show a new negative corona test. Children and youth are exempted from most of these measures. The coronavirus situation is getting worse, North-Rhine Westphalia’s ministerial president Hendrik Woost said during a press conference on Tuesday, emphasizing that the country’s east and south are going through a particularly difficult period.

The seven-day incidence rate in Germany hit a new high of 312.4 cases per 100,000 residents on Tuesday, after rising to more than 100 within a week, the Robert Koch Institute for Infectious Diseases (RKI) said. Last week, the daily number of new infections exceeded 50,000 for the first time since the start of the pandemic. On Tuesday, RKI recorded 32,048 new infections. The surge in cases has increased the pressure on negotiators in the government’s coalition talks. Discussions between the Social Democratic Party, the Greens and the Liberal Free Democratic Party entered the final stages on Monday. The Bundestag, the lower house of parliament, is expected to accept reforms to the country’s Infection Protection Act on Thursday. On the same day, a meeting of the heads of ministers of federal states is scheduled to agree on a common approach to fight the fourth corona wave.

Acting Health Minister Jens Spahn on Monday told broadcaster ZDF of his desire for uniform 2G regulation across Germany, saying the necessary decisions will finally be made this week and, above all, the uniformity that we need to be approved by citizens.