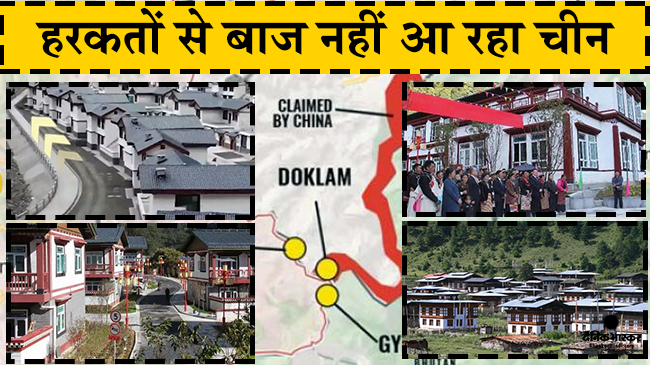 Digital Desk, New Delhi. Amidst the ongoing border dispute between India and China, open source intelligence account Detrasfa has made a shocking claim. It has claimed by sharing satellite images that China has established four new villages in the disputed area of ​​Bhutan near Doklam. China has built these new villages after May 2020.

Disputed land between #Bhutan , #China near Doklam shows construction activity between 2020-21, multiple new villages spread through an area roughly 100 km² now dot the landscape, is this part of a new agreement or enforcement of #China‘s territorial claims ? pic.twitter.com/9m1n5zCAt4

The construction of Chinese villages in the territory of Bhutan is clearly visible in the image obtained from the satellite image. Construction activity was shown during 2020 and 2021 in the disputed territory of China and Bhutan. These villages are situated in an area of ​​about 100 sq km. This move of China is worrying for India. For the border security of Bhutan, India maintains a limited armed force there. In such a situation, it will also have more impact in the form of geo-strategic impact. In view of this, the construction of villages by China is not considered right for Indian interests.

According to Detrasfa, these four new villages have been created after May 2020. This area is adjacent to the Yangdu-Chumbi Valley of China and is close to the Ha area of ​​Bhutan. Let me tell you This area has long been considered a disputed dispute between China and Bhutan. However, it is not yet clear whether Bhutan has given this area of ​​about 100 square kilometers to China or not. Recently China and Bhutan signed an agreement to settle the border dispute.

According to ABP, a private news channel, about a year ago, had shared pictures about a similar village in China near the disputed Doklam area adjacent to Sikkim. Let us tell you that recently the Commanding-in-Chief of the Eastern Command of the Indian Army, Lieutenant General Manoj Pandey, had expressed concern about these villages in China. A few days ago, a report by the US Defense Ministry made a big disclosure saying that China is setting up its villages in disputed areas adjacent to India. The Pentagon report specifically mentioned a village with 100 houses in the disputed area adjacent to Arunachal Pradesh. The US Defense Department Pentagon had reported the settlement of villages by China in the disputed area adjacent to Arunachal Pradesh with Bhutan. After this report, India gave a strong reaction.

The ongoing dispute between India and China on the Line of Actual Control is not over yet, in the meantime, such news coming is a matter of concern for India somewhere. Today the 14th round of talks between the military officials of India and China is going to be held at WMCC.