Afghan women are protesting by taking to the streets for the… 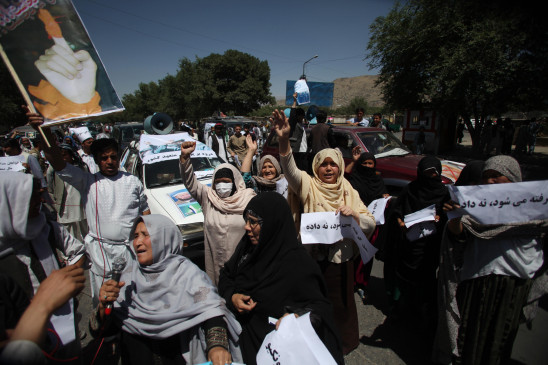 Digital Desk, Kabul. The delay in providing women the right to education and employment by the Afghan Taliban-led interim government in Afghanistan has triggered protests and uproar in the country. On Sunday, dozens of Afghan women again took to the streets of Kabul demanding their right to learn and find employment under the new Islamic Emirate regime. Raising slogans for their rights, the protesters also targeted the international community for ignoring the dire need for the provision of basic rights to women in the country. One of the protesters said, we can tolerate hunger, can live without food, but we cannot tolerate injustice. We demand freedom and justice in our country.

The latest is part of a series of protests Afghan women have been demonstrating since the Taliban took control of Afghanistan. In recent days, Taliban security officials assaulted female protesters, while media persons covering the protests were also attacked and detained. The Afghan Taliban Interim Government has subsequently announced through its Ministry of the Interior (MOI) that demonstrations will not be allowed without the permission of the ministry concerned.

Later, a pro-Taliban women’s rally was held in Kabul, where women raised pro-Taliban slogans and expressed their support for the newly enacted Islamic law in the country. He said the Taliban claims that under Islamic rule law, women will be granted all basic rights in accordance with the teachings, including the right to work and education to their female citizens. However this is not being implemented. Recently, a girls’ school was opened in Herat, while the Taliban claimed that female nurses and doctors were coming to work without any problems.

Islamic Emirate of Afghanistan (IEA) Deputy Spokesperson Inamullah Samangani said, “The Islamic Emirate does not treat any part of the society discriminatory, problems and issues exist, we promise to solve the problems.” But many believe that most women are still barred from employment or education. Abdul Qadir, a local resident of Kabul, said that women are half of the society, they have rights and they should also have opportunities to learn and work based on the customs and culture of Afghanistan.